"Would you be able to handle being a titleholder, even with your mental illness?"

Second of all, that’s why I need to be titleholder.”

Okay, so that’s not a direct quote from my answer to this question in my Miss La Crosse/Oktoberfest interview… But you get the idea.

Some say “pageantry” is bad for women’s mental health – that is breeds insecurities and poor self-image. I feared these things heading into my first local competition, but now I argue that this “competition” is one of the best things that has happened on my journey to wellness and healing.

Let’s just look and appreciate them before I get too serious. 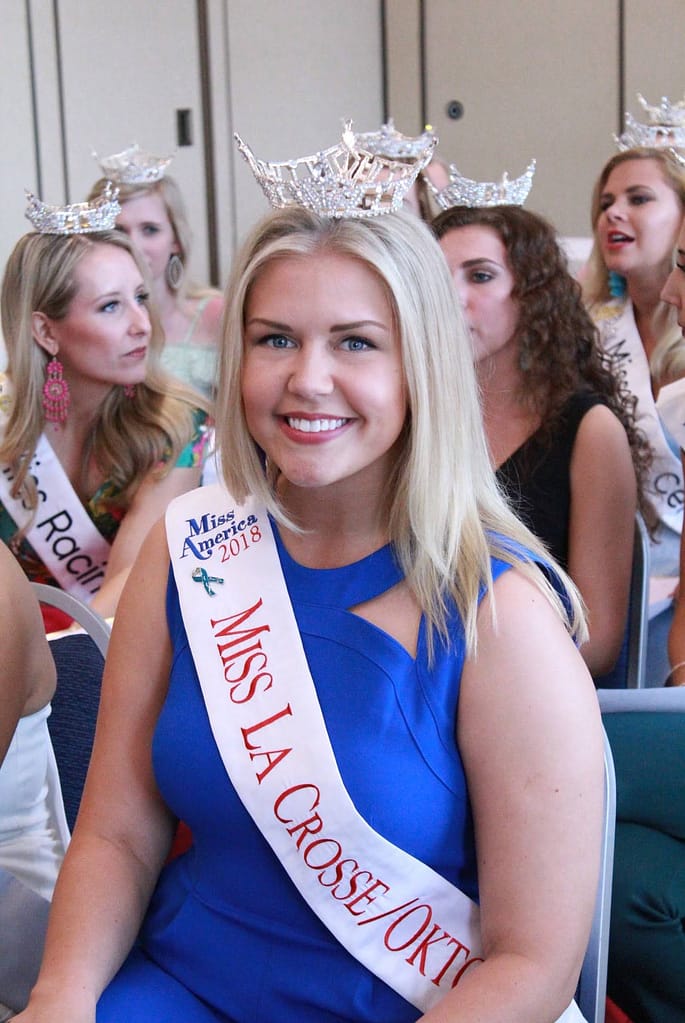 These women. This happiness. It’s real and it’s truly life-changing.

It sounds cliche, but gosh it’s just true. I’m so grateful for them and our shared week. Meeting motivated, like-minded women who want to make a difference in this world as much as you do is the greatest gift. Thank you, MAO, for bringing them to me.

Now, about that “want to make a difference in this world” part…

Why did I choose the Miss America Organization as my platform to promote my cause of mental health awareness? Why would I choose a “pageant” to do this?

I was originally drawn to my local organization, Miss La Crosse/Oktoberfest, due to its heavy emphasis on service. Nothing makes me feel better and more fulfilled than helping others. However, I always thought that “service” required volunteering my time or donating my money – both things I had little of as a college student. It wasn’t long after getting involved in this organization that I realized I could still help others but in a new, creative way. That way was sharing my own story with mental illness and encouraging others to share theirs.

When I didn’t win at my first attempt for a title, I attempted to grow my platform of mental health awareness. I tried to raise funds and grow a following, but didn’t see much success at all (in fact, I only sold 1 shirt during my first t-shirt fundraiser and had to return their money because we couldn’t even print the shirts. lol. awkward.). I was doing everything “right” according to the books but couldn’t manage to get my foot in the right doors at the right times.

Then, I became Miss La Crosse/Oktoberfest 2018.

After a few short weeks of being Miss LCO, I tried again to further develop my platform, “Warrior, Not Worrier”. Instead of flops, I saw insane success. I ended up raising over $1,100 in several short months for local mental health initiatives and gained more followers than I knew how to track. Instead of unanswered e-mails from youth groups, I was finding a way in to speak with at-risk youth about mental wellness and help build their resiliency with very few questions asked about my creditability.

The Miss America Organization has allowed me the platform to make a change I didn’t know I was capable of. It has given me the stage to discuss topics I wouldn’t get to outside of this competition. MAO has granted me a network of incredibly talented and motivated individuals who will stop at nothing to see me succeed. Oh, and it has also paid for a year’s worth of my undergraduate degree. Nbd. 😉

Maybe I would’ve accomplished all of this without a crown and sash. But, maybe not – and no one likes a story about failure. So I’ll take this happy ending and give credit where credit is due. 😉

This site uses Akismet to reduce spam. Learn how your comment data is processed.